Located in the northern part of the country, San Pedro Sula is only a few miles from the coast and has always played a major role in Honduran history. The city was founded the 27th of June, 1536 by Don Pedro de Alvarado himself.

The Spanish conqueror founded it with the name of “Villa de San Pedro de Puerto Caballos” and within the next 5 years it was known as San Pedro Sula, with the name Sula deriving from the local dialect Usula, meaning “valley of birds”..

Getting to San Pedro Sula

There is also daily air service by Sosa Airlines and Central American Airlines to San Pedro from La Ceiba, Roatan and Tegucigalpa. In addition, there is a first class bus service between Tegucigalpa and San Pedro Sula.

The highway connecting both cities is one of the best in Central America and it will take you less than 4 hours to travel by land between both cities. Bus lines that offer first class non stop executive service are Saenz Primera Clase, Hedman Alas and Viana Clase Oro.

There are many banks in San Pedro Sula, as well as currency exchanges. Most banks are open from 9:00 a.m. to 4:00 p.m. from Monday to Friday, and only in the morning on Saturday.

There is also a “black market” that usually operates out of the airport as well as from the main square in San Pedro Sula. There is very little difference in the rates offered by the black market, and therefore, it is safer to exchange your money at a bank.

Most major hotels also have money exchange service, some with very competitive rates and others with rather unfavorable ones. It is a good idea to check around prior to exchanging your dollars. International credit cards are widely accepted in San Pedro Sula.

Visa, Master Charge and American Express are the preferred cards. Your purchases with credit card will be charged in lempiras. Cash advances from your Visa or Mastercard can be arranged while in San Pedro. Banco Atlantida, with several offices in San Pedro offers cash withdrawals from your Visa card.

Tap water is generally unsafe to drink in all of Honduras and San Pedro Sula is no exception. Most of the better restaurants and hotels treat their water, making it safe for you to drink. Purified water can be purchased at different places throughout the city. Another safe alternative is to stick to bottled soft drinks or beer.

Free WiFi is available in many public areas such as the various Malls and Pizza Hut locations in along the San Pedro Sula streets. The local mail office is located on 3a Avenida and 9 Calle S.O.

The dry season, or verano, in San Pedro Sula is from December through April inclusive, with March and April being the hottest and driest months. The rainy season or invierno is from May through November and the wettest months are August and September.

The rainy season or invierno is from May through November and the wettest months are August and September.

Getting Around San Pedro Sula

San Pedro is an easy city to get around in. It is divided into four quadrants following the old Spanish system of building cities: Northeast, southeast, northwest and southwest. All the streets are numbered, with avenues leading from north to south and streets east to west.

Downtown is marked by the 1st Street. The most important commercial street is Third (tercera) Ave. Although there are plenty of public buses, you will find that taxis are plentiful and very reasonable.

Whatever the case, make sure that you negotiate the taxi rate before getting into it. It is a good idea to ask the bell boy at your hotel (or any other reliable source) what the going rate for a taxi to where you are headed for costs.

Another alternative is to rent a car. Most of the US car rental franchises have offices in San Pedro Sula: Avis, Budget, Dollar, Hertz all do, in addition there are local rent a car companies. Most have offices at the airport. and there is usually one in the lobby of the better hotels.

Hondurodendron Discovered – The Hondurodendron is from Parque El Cusuco, located west of San Pedro Sula, in the Department of Cortés. It appears to be widely, but sparsely distributed within the park.

It’s found mainly as an understory tree, growing under a high forest canopy, also occurring in forests disturbed by natural tree-falls and alongside trails; it grows in well-drained soils, on slopes and ridgetops. Read More

The Centro Cultural Sampedrano, where the public library is located, hosts and organizes most of the cultural events going on in San Pedro Sula. It often has exhibitions and events scheduled, and you may visit the center to obtain more information. It is located on 4a Avenida with 3a Calle N.O. Telephone is 2553 3911​ 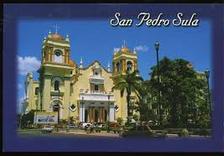